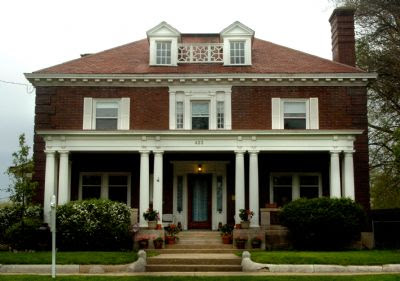 Historic High Street Home
Evidence of early man in Peoria goes back over 10,000 years. Burial mounds indicate a Native American civilization that was highly developed. The sheltering bluffs of the Illinois River and the wide lakes on the River provided an excellent place to live. The Dickson Mounds Museum has some great information about this era. http://museum.state.il.us/ismsites/dickson/

By about 1650 the Illini Indians were located in the Peoria area. The major tribes of the Illinois Confederacy were the Peoria, Kaskaskia, Michigamea, Cahokia, and Tamaroa. The Peoria were one of the principal tribes of the Illinois confederacy. Marquette visited Peoria in 1673. In 1680 Robert Cavalier Sieur de LaSalle and Henri de Tonti constructed Fort Crevecoeur on the east bank of the Illinois River. Tonti and Francois Daupin de LaForest built Fort St. Louis II (frequently called Fort Pimiteoui), believed to have been located at the foot of Mary and Adams streets.

The Immaculate Conception Mission was established here by Jesuit missionaries. A village grew up around the fort. This first European settlement in Illinois had trading posts, a blacksmith shop, a chapel, a winepress, and a windmill. During the 1760s Jean Baptiste Maillet, a French-Canadian, assumed a leadership role in the village. In 1773 Maillet sold his property to Jean Baptiste Pointe du Sable, Peoria's most notable black settler, who later founded Chicago. Good sources for this era include:

With British victory in the French & Indian War in 1763, France relinquished the Illinois Territory to Great Britain. In 1778 George Rogers Clark captured the Illinois Country.

In the War of 1812 Americans burned French Peoria to the ground, took the inhabitants captive, and transported them to Alton. French villagers were compensated for their losses by an act of the United States Congress.

American soldiers erected Fort Clark in 1813 where the French village once stood near the site of Liberty and Water Street. In 1819 Josiah Fulton, Abner Eads, and five other young men came to Peoria by keelboat and horseback. In 1825 the county was organized and the village name was officially changed from Fort Clark to Peoria. Chicago was part of Peoria County until 1831.

The Galena Trail and the Peoria-Galena Coach Road were part of the early history of the Peoria region. These two roads contributed a great deal to Peoria's early economic prosperity. The 1825 Galena Trail originated in Peoria and ran to the lead mines and Galena. It was the first open and heavily used Anglo-American trail to cross the Indian lands of northern Illinois. The 1833 Peoria-Galena Coach Road was the first state road in northern Illinois. The roads/trails were both a sign of Peoria's economic strength, but also were partly responsible for that prosperity. The riverboats did not come to Peoria until 1830, and then they were seasonal. They did not run in the frozen winter, or the drought-dry summers. Land transportation was always important. Sources & Links for more information: www.galenatrail.com
http://galenatrail.com/test.html

In 1854 Abraham Lincoln and Stephen Douglas gave impassioned speeches on the courthouse steps regarding the issue of slavery. In 1861 Peoria Mayor William Willard led a war recruitment rally for

Because of its proximity to the river and to corn, Peoria was a major liquor manufacturer. Some of the large homes on High Street and Moss Avenue were built from the Whiskey Barons. Prohibition greatly diminished this industry.

Peoria is the largest city on the Illinois River and the county seat of Peoria County, Illinois, in the United States. As of the 2000 census, the city had a total population of 112,936. The Greater Peoria Metro area, including suburbs and surrounding, has a population of about 370,000. The metro area is the second largest in Illinois.

Peoria has become famous as a representation of the average American city because of its demographics and its perceived mainstream Midwestern culture. On the Vaudeville circuit it was said that if an act would succeed in Peoria, it would work anywhere. The question "Will it play in Peoria?" has now become a metaphor for whether something will appeal to the American mainstream public, and Peoria is often used as a test market for new products, services, and public policy polling.

The Library of Congress has some nice information about historic homes in Peoria - Copy the address into your browser command line, and search by street or address.